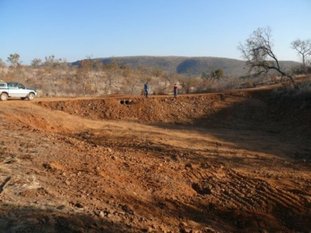 Detail: Hennie (41) was kind enough to donate and help us put a cement layer in a section of the Southern dam. In response to this gift we have now named the Southern dam Isipho which means “gift”. We are also putting piping down with a ball valve system to ensure that there will always be at least some water in the dam. Tracks around the area indicate that the animals have discovered the dam already. Thanks Hennie!

The dams were responsible for a lot of dissatisfied owner inquiries, but fortunately we have some progress to report. The Southern dam is theoretically finished, but because of the fact that waterproofing was not yet done, the dam does not hold water. Furthermore the positioning of the dam is not such that a lot of water finds its way there, so it is unlikely that this will ever be more than an occasional dam and a drinking spot for the larger part of the year.

As far as the Northern dam (Idwala) goes, many of us were under the impression that we would get a 5m wall, the Developer maintains that the 2.5m wall built is what was promised. Be that as it may, the dam has great potential. There are a number of things that still need further work like the top layer, rocks on the wall sides and further work on the overflow  run off.

The dams’ progress has always been slow. While the original work was hampered by factors described below, the lack of funding is currently preventing further progress.  To name but a few of the reasons for the original delay: The tracks of the excavator came off and the hydraulic oil was leaking rather badly, so the hold up was largely due to breakages. Perhaps, just like sharp and blunt knives, the condition of the teeth of the excavator may indicate as to why the hydraulics have to work so hard, but I am not the earth moving expert, I am just speculating…

The northern dam, because of its location is named Idwala which means rock . This second dam would originally have been lower down in the same catchment area as the dam on the south side, but was moved to the northern side of the mountain.

This not only drastically increase the catchment area for the dam, but also provides a water point on the northern side as suggested in the Eco study. 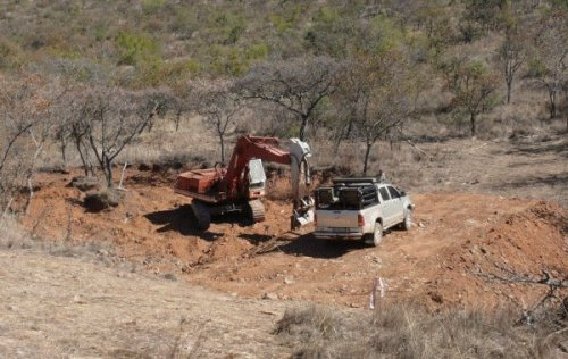 Just to manage expectations, it may be valuable for those unfamiliar with ground dams to know that new dams leak. As the ground washes down with the leakage water, the leaks get blocked. Originally with larger and eventually very small sedimentary layers. It may therefore well be that the dams may not hold a lot of water from year one. We do plan to cement the lowest part of both dams to provide for at least a small supply of water which could serve the drinking needs while the natural sealing process is on the way. The Waterberg is notorious for rock formation cracks and we will have to intervene drastically if we want the dam to stop leaking.

When looking at the 2 pictures below, note the colour change due to the rain 🙂 The developer has undertook to strengthen the overflow on the Southern dam and to enlarge the Idwala’s outlet. 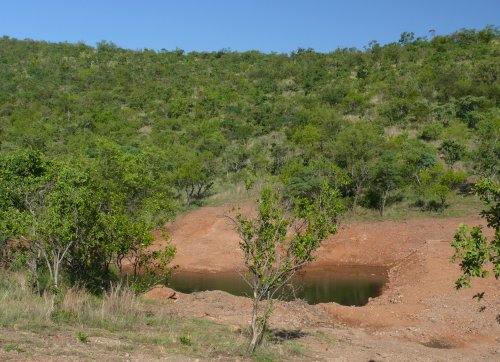 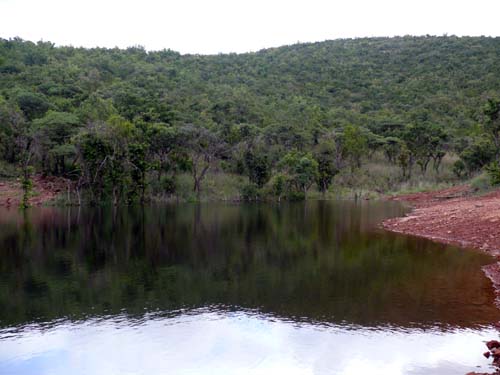